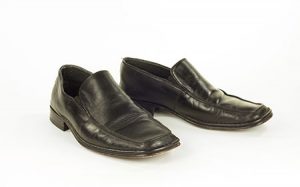 Summary
I did not know what to do with my grief. I could not stand that much sorrow in the house of mourning. I just wanted to be alone with my sweet memories. All I could do was follow an old Turkish custom. My brother asked me, “Why did you leave my father’s shoes on the sidewalk?” I looked at them emptily and replied, “This is what people do when someone dies, kind of like saying goodbye.”

My father never spent much money on his clothing. He saved all his money for us, for our education and our future. When his first child was born, he even left the comfort of his hometown and moved the family to Istanbul to provide us a better lifestyle. My mom always teased him for being cheap, buying poor quality brands, especially shoes. I remember his smile as he answered, “I don’t need luxury with four kids. Their happiness is my luxury.”

I was holding his shoes: a pair of black leather loafers, worn but in good condition. I headed downstairs in our apartment building. Somehow, every step seemed to be in slow motion. If only it were a nightmare that would end soon, but I could not wake up from that nightmare.

Every step evoked another memory. I remembered those wonderful family vacations. When we pointed out places in travel magazines, my father would always say, “Okay, we will go there!” Our favourites were beaches on the turquoise Aegean Sea, small Mediterranean bays surrounded by orange and banana groves, the Butterfly Valley, the Dead Sea, and historical Cappadocia. My father took us wherever we asked to go.

I was always the driver. He was the co-pilot, giving frequently wrong directions. At first, I thought that he was misreading the maps. Later, I realized that he enjoyed being off the route in the countryside where we met genuine, local people. We enjoyed getting lost. With my father, every holiday was another adventure, discovering tiny fishing villages, staying in bed-and-breakfasts, hiking to the ruins of ancient cities, and swimming in untouched coves.

My steps slowed down with every scene from the past. I wanted to hold onto each memory as long as possible. How happy he was a month ago when we were celebrating my master’s degree. Surrounded by his family, he indulged in seafood and his favourite drink at that Bosphorus restaurant.

My husband wanted to emigrate, but I would not leave my father. I knew that this day was coming. He had been a heavy smoker. Although he tried to quit, he did not always follow his doctor’s recommendations. The last couple of years were a struggle with frequent hospital visits, an angioplasty and a lot of medication. That is all over now.

My father was a gourmet cook and enjoyed inviting people over for dinner. His hospitality and sophistication earned him a lot of friends. Not surprisingly, today his home was flooded with people. My steps had taken me to the first floor of the six-storey building. We moved to this middle class flat in Istanbul when our previous one became too small for a family with four children. I grew up here. My father always said that I would have to look after my younger siblings, as I was the oldest kid in the family. I did my best, and he was proud of me. Now, realizing that his absence would put the whole responsibility on my shoulders, I felt panic.

I passed through the foyer and reached the entrance of the building. I left this home when I got married, but I didn’t go far. My husband and I rented a small place in the same neighborhood. It was convenient for me to be close by. Now that my father was gone, my husband would convince me to move very far away—to Canada. I knew that.

I stood staring for a while. The street looked strange and lifeless. I placed my father’s black loafers at the edge of the sidewalk and turned back. At that moment, I noticed that my brother was watching me with questioning eyes. He asked, “Why did you leave our father’s shoes there?”

I stood staring for a while. The street looked strange and lifeless. I placed my father’s black loafers at the edge of the sidewalk and turned back. At that moment, I noticed that my brother was watching me with questioning eyes. He asked, “Why did you leave our father’s shoes there?”

What could I say? I was following an old tradition. Even my father would have laughed if he had seen these shoes on the sidewalk. In the old times, this gesture was a kind of silent sign heralding a funeral inside. It also revealed the gender of the deceased. Now, in the age of cell phones and the Internet, we do not need such a custom, but I did not know what else to do with my grief. Following the shoe custom like a robot was all I could manage. I looked at my father’s shoes emptily.

I did not want my brother to see my tears. Wiping them, I said, “This is what people do when someone dies. It is kind of like saying goodbye.”

In My Red High Heels

My Great Grandmother: The Wartime Shoemaker