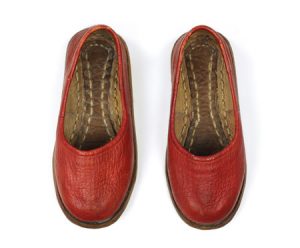 Summary
Zeynep, my great-grandmother, was a shoemaker during the First World War. For over nine years, her husband was a soldier, and this tiny, resilient woman continued the family business. One day, her husband managed to find his way back to the town. He was a wounded man, never again the same man she had married. Quiet, anxious and restless, the only thing he could do was help his wife make those shoes. And so the shoemaking continued. Nowadays, those local, handmade shoes are purchased as souvenirs by tourists to remember the area known as Gazi Antep. To me, they are reminiscent of my great-grandmother.

I met my great-grandmother Zeynep several times during my childhood, whenever we visited my parents’ hometown. Over 95, she could barely walk around her room. This tiny woman raised three sons and two daughters, taking care of her entire family during and after World War One. However, not until I came to Canada did I learn that she had been a shoemaker. When I saw the Bata shoe collection and heard that most shoes were made by men, a voice in my head said, “Yes, but there were some female shoe makers”. I phoned back to Turkey to my aunt, the oldest living person in my family. She repeated to me the stories that I had heard as a little girl about this shoemaker in our family.

This scene came into my head: the little house behind high hewn stone walls surrounding the garden., Zeynep making tiny holes with a pin on thick buffalo leather, lining them up one-by-one all around the edge of the leather piece, her tiny fingers moving swiftly. At every curve, she would pause and look at the holes carefully to adjust the lines made by them. These leather pieces had to be symmetrical and equal in size. She took a sole and an insole and placed them face-to-face, making sure the holes matched. Then she spread some glue on the insole. She bent forward, picked up her needle and string, and started to sew.

One day as Zeynep sat there sewing, her eyes caught her sons playing with a dog at the edge of the pit in the garden. Although it had a circular wall and a cover, the young boys could have fallen in. She cried out, “Ahmet take your brother inside! It’s getting too cool!” Her eyes searched the dim room to find vamps. Her old father had cut them out that morning. It was not easy. Hard oily leather resists every attempt with a knife. That’s why men usually did this part. She saw the vamps under a pile of leather pieces. They were made out of goat leather, with an inner lining of sheepskin. It was thinner than buffalo leather, so it was easier to penetrate with a needle. She hoped that she could finish sewing them by nightfall.

She did not want to use extra oil to illuminate the tiny room. Everything was expensive. Even if she had the money to buy oil, she couldn’t, because there were shortages. She could hardly afford food for her two children and her elderly father. They survived on the income from her shoemaking. Her husband had been away for nine years in the front line at Trablus (Tripoli). He came home once for a month. During his last visit, Zeynep became pregnant with their second son.

That day, lost in thought but maintaining a steady pace with her sewing, her fingers rhythmically inserting the needle and pulling it up, she heard a groan from the garden door. Ahmet ran outside. He came back quickly with wide eyes and said, “Mom, an Arab is here asking for you!” She rushed to the garden and was startled by the appearance of the strange man. Was her mind playing tricks on her? This sunburned, scrawny, exhausted man in Arabic clothing had the same bluish green eyes that her husband had. The man uttered a few words and she realized that the voice was her husband’s.

He was one of a few surviving soldiers of the collapsing Ottoman Empire. Somehow, he managed to make his way home. Walking countless kilometres across the burning, desert sand had cost him his right big toe. And that was not the only price he paid in the First World War. This wounded man was never again the same man Zeynep had married. He was quiet, anxious, withdrawn and restless. He had trouble falling asleep at night. He stayed away from people, and never worked or socialized again. The only thing he could do was help his wife make those shoes.

And so the shoemaking continued.

Nowadays, those local, handmade shoes are souvenirs the tourists buy to remember the area known as Gazi Antep. But they speak to me of my great-grandmother.

In My Red High Heels